Stefan Pierer gave one big interview last month which spawned a lot of speculations and a lot of real deals too. He emphasized the importance of Europe and their upcoming market India in their success and also made it clear that they were the two most important markets for them. KTM recently launched the Duke 690 in U.S. and looks very well on the right track in the race to being the segment leader in quite a lot of markets.

Today we have for you an interesting bit of news from the Indian subcontinent. KTM chief Pierer announced that they were going to be quite aggressive when it came to the Indian market and KTM will be bringing in a new product every year for the Indian market. He also mentioned that India will get a faired KTM Duke 390 and we started out with the possibility that India would not get the naked street-fighter version of the bike. But wait, we might just be wrong. 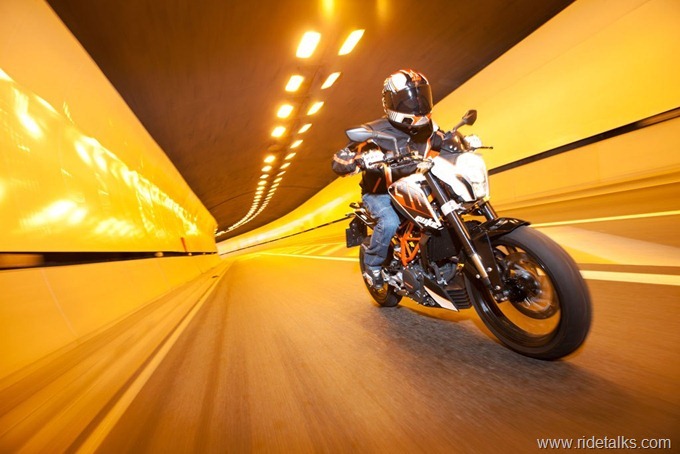 In a presentation showcased to the United States Dealers over almost an year back, KTM showed that U.S. was going to get the naked version of the KTM Duke 390 in 2013 with the Faired and Enduro versions following in 2014. But on the other hand, KTM plans to launch the Duke 390 sometime before mid-2013 in India and seeing that the products get launched in the U.S. and Europe first, India might very well get the Duke 390 in naked form in 2013 with the faired versions to follow next year.

When launched, it would carry a killer price tag of an amount south of Rs.2,00,000 or USD $3800 which makes the bike an excellent value for money as it would put the bike in the range of the top end variant of the CBR 250R in India. This will be due to the high level of localization KTM will bring to the bike in India. Expect this 45 BHP – 35 NM road-runner to hit the Indian roads soon at a pocket friendly price. The U.S. might be the country of the Harleys, but India seems to become the country of the Dukes. Well done, KTM.