Toned down naked variants of the fast going faired models isn’t something new- but it has been more for the higher displacement category i.e. the litre class CBR & CB series from Honda, the R and the FZ from Yamaha, the GSX and GS series from Suzuki etc. But off late the trend has trickled down to smaller displaced motorcycles.Recent instances being Honda which has already showcased the CB300F- a naked variant of the CBR300R and Kawasaki unveiling the Z series in the 250 and 300 engine capacity- which essentially are naked derivatives of the smaller Ninjas. Adding to the faired-to-naked trend has been Yamaha who have been spy spotted with the Yamaha MT25 motorcycle- which again is a naked offshoot of the faired Yamaha R25. 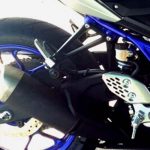 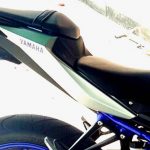 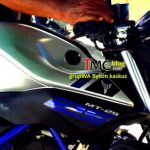 There aren’t much changes when it comes to parts sharing with its faired sibling, and the new Yamaha MT25 looks to retain most of the hardware and plastics from the R25 i.e. engine, frame, swingarm, exhaust, suspension, seats etc.. Only visible alterations include a new headlight and air scoops.

What needs to be seen is the state of tune of the 250cc parallel twin. While the R25 cranks out a meaty 36 ps of power, but it comes at a stratospheric 12000 rpm with 22.6 nm of twisting force again at a high 10,000 rpm. Would turn out to be a tedious affair to ride a street bike around town and hence it won’t be out of context to expect the Yamaha MT25 to sacrifice the horses for better rideability in everyday scenario.

Shedding all the plastic flourish, the Yamaha MT25 should score on the pricing factor to take the battle to the Hondas and the KTMs. Not sure if it would be making to Indian biking shores anytime soon.