Japanese motorcycle giant Suzuki has just launched a spruced up version of their flagship GSX-R1000 to mark the 30th anniversary of the superbike. The new Suzuki GXR-R1000 30th Anniversary model wears the blue and white replica colours of the groundbreaking 1985 GSX-R750 which conceived the current GSX-R line. Gixxer fans all over the world now know who to thank. The paint scheme was also showcased in the MotoGP grand prix in Germany on the factory racing bikes of Aleix Espargarò and Maverick Viñales as an expression of obeisance to the time honored veteran. 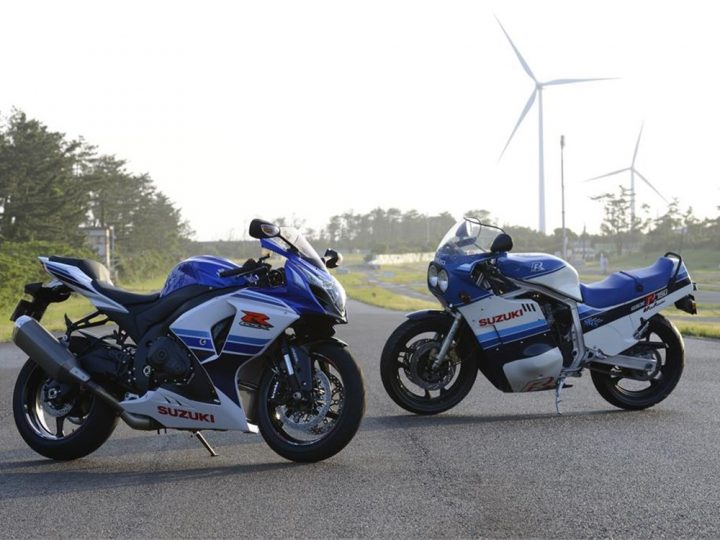 New model pays homage to the original GSX from the 80s

The GSX-R1000 has always had it all, looks, charisma, sound, and performance. A perfect blend of track engineering and road ready design. Its ability to push itself and outshine rivals has forever been its weapon. According to some it plays second fiddle to the company’s crown jewel, the Hayabusa, but there is absolutely no room for misinterpreting the gixxer to be a milder and softened machine than the ‘Busa. It is equally fast and ruthless, if not more and is not at all what it disguises itself as.
Suzuki has always been predominant in racing and have a rich racing heritage. Reigning the FIM World Superbike Championship of 2005 with Australian Troy Corser leading them to 8 victories and 18 podium finishes. The SERT (Suzuki Endurance Racing Team) with the GSX-R1000 is one of the most successful teams in the endurance world championships, shelling out 14 wins from 1983 to 2014. It’s a record and title gained through a dedicated drive to own the racetrack. The company is confident that there is much more to come as we all know the true potential of the Gixxer.

Suzuki has confirmed that there have been no mechanical changes to the bike (not like it needs any). Which means it will proudly carry the superb 999cc liquid cooled DOHC beast. Thankfully, they haven’t restricted it to a limited production. Knowing the ardent following and lovers of the gixxer, the bike will be a full production model and will start sale in the UK by November. Pricing is expected to be in the same range as the current bike which is 10,999 £ (INR 10,87,691) for the top of the line ABS spec model. Riding the bike in those colors then will be like a retired sportsman looking at his trophies and reminiscing in the nostalgia. So to the riders drooling right now, keep calm and wait for the Gixxer.

Pour in your comments on the new Suzuki GSX-R1000 30th Anniversary model in the comments section below and stay tuned to Ride Talks for more dope on the biking world.