Have you ever hallucinated while watching MotoGP that you are on one of the bikes and absolutely gunning it to victory? If yes, then your stars are aligned. Honda has created a machine which is a road legal clone of their MotoGP bike the RC213V. They are calling it the RC213V-S; that’s how close it is to the virtuoso. Promising paramount performance. Sharing the similar HRC red, white and blue colors with its MotoGP sibling, the RC213V-S is definitely a head turner. But despite being a polished hooligan, it restrains itself from looking obnoxious.

Customizing a MotoGP bike for the road isn’t as easy as it may be perceived. Honda has been remarkably dedicated to keep it as close to the roots of MotoGP as possible by processing accuracy and increasing levels of technical proficiency, giving it mass centralization which keeps the centre of gravity low and heavily reducing frictional losses. Result of that, agility immediately shoots up the charts. Now although we all would have loved to ride the exact same bike that Marc Marquez thrashes around the globe, it is not that simple. Certain mandatory changes were made, such as the pneumatic valves were replaced with coil springs for a comfortable ride. Rideability is improved with a ground clearance of 120mm and seat height of 830mm.The seamless gearbox which works like a dream on the track would have been a nightmare on the streets, so Honda swapped it for a conventional 6-speed constant mesh which will be durable for long term use. All this borrowed without pretense, from the already available RCV 1000R open category race bike. After such an idea is finalized making sure its legal is the most crucial and tough task of the whole project. Keeping in mind the safety and daily riding necessities, Honda has fitted it with headlights and taillights. It also has practical parts like parking stand, number plate holder, side mirrors, speedometer, horn and a muffler on the exhaust which passes through a catalytic converter. It shows off new tires, brakes and pads with a wider steering ratio. The tires are 120/70 front and a tarmac chewing 190/55 rear, both supplied by Bridgestone and wrapped around the jaw dropping 7 spoke forged magnesium wheels from the house of Marchessini, in Italy. Also 320×5.5mm 4 piston dual hydraulic brakes on the front, and 220x5mm 2 piston dual hydraulics on the rear will bring you to a halt before you would know. The only way to stop faster is to run into a wall.
The power plant that is honored to be placed is a 4 valve liquid cooled DOHC V-4 firing a respectable 101bhp and 90N.m. of torque at 8000r.p.m. The sports kit however musters over 215bhp at 13000 r.p.m at the twist of the throttle, with over 118N.m. of torque at 10500r.p.m. The Sports kit unfortunately is only available in Europe and Australia; and provides goodies like front air duct, exhaust muffler, ECU etc. 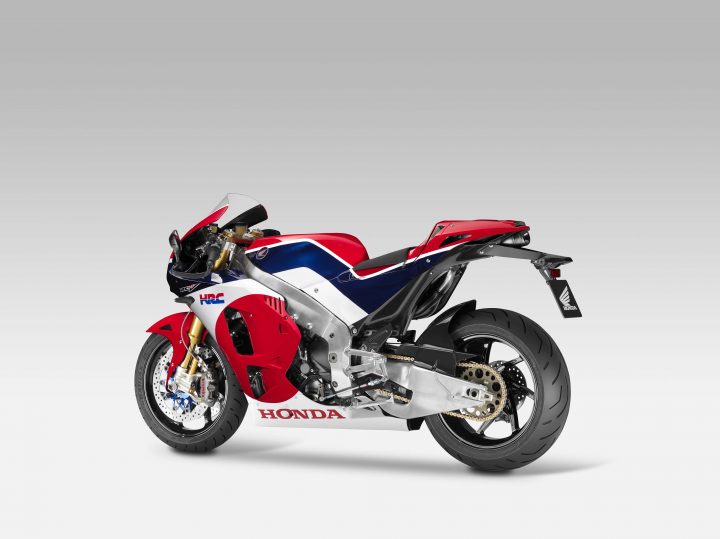 The whole frame is diamond shaped and is all aluminum for torsional rigidity that helps put all those horses on the road. The welding is TIG which has a much higher accuracy and higher welding quality. As weight saving is crucial in racing, the bolts are also titanium alloy covered in molybdenum grease for improved axial stabilization. Such an obsessive and hardcore approach to weight saving, results in the Honda RC213V-S weighing a model shaming 190kg. Honda has priced it at a whopping 184,000$ in the US and €200,000 throughout Europe, confirming the age old myth; money can buy happiness.