Austrian bike marque KTM has been busy pumping a new lease of life into the Husqvarna brand and the proceedings seem to have reached the next level with the first-ever sighting of a new cafe racer model that seems to be powered by the KTM Duke 690’s motor. It maybe noted that while KTM has been pretty vocal about its plans for the Husqvarna brand, the manufacturer has till now refrained from divulging any details on the upcoming Husqvarna cafe racer. It maybe noted that so far, Husqvarna has showcased only the 701 Supermoto in both concept and near-production forms, along with 401 Vitpilen and 401 Svartpilen concepts based on the KTM 390 Duke. It maybe noted that KTM and Husqvarna boss, Stefan Pierer, has already stated that the plan is to eventually use KTM motors and platforms for the upcoming Husqvarna machines. 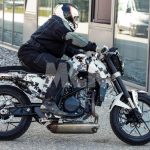 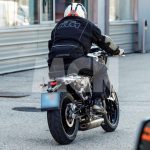 This new upcoming Husqvarna Cafe Racer model was seen returning to the KTM Research and Design headquarters in Mattighofen, Austria, and from the looks of it, is far closer to hitting the production line than any of the other upcoming Husqvarna bikes. Also, this is the first Husky to be seen powered by the 690cc single-pot KTM powerplant, which means that the specification-sheet of the upcoming bike could be somewhat similar to that of the 690 Duke. As we said, official details on this model are scarce at this moment but the test mule does bear striking similarities to the 401 Vitpilen and 401 Svartpilen concepts that were showcased at the last year’s Milan motorcycle show. Various international publications have already reported about rougher test miles that have been spotted being powered by the 373cc motor from the KTM 390 family. However, with the exception of the 701 Supermoto, the Husqvarna cafe racer is the largest-capacity Husky prototype that has been spotted since Pierer took over the brand from BMW in 2013. Also, the sighting of a cafe racer model ratifies Pierer’s assertion that Husqvarna and KTM products will have different identities, in spite of extensive parts sharing between the two brands.

KTM-Husqvarna plans to come up with as many as three new products in next 18 months. The first of these will be the production-spec 701 Supermoto and Enduro models. Subsequently, the manufacturer will also launch the production-spec Svartpilen and Vitpilen models. What’s unclear though is how the Husqvarna cafe racer fits into the scheme of things, but our guess is that this bike could be released along with the upcoming 401 models. Stefan Pierer has earlier stated that he hopes to see Husqvarna in the list of top 5 highest selling bike manufacturers in Europe within next five years.

Stay tuned to RideTalks for more details on the Husqvarna cafe racer model.