Honda has been fighting it out with Bajaj for quite some time in India to gain the number 2 spot but it has been a battle where a day is won by Bajaj and the next by Honda. But now Honda plans to become an undisputed winner there. They made an announcement recently that they planned to launch new bikes and scooter every 3 months in 2013 and as promised, started with the 2013 variants of their automatics in the country.

However, a segment where Honda has missed out dearly has been the 150cc performance segment. They tried creating waves with the Honda CBR 150R but failed big time. But from the reports that have started pouring in, they plan to take on creating a new segment in the Indian automobile market, a naked performance bike segment and the torch bearer will be a stripped down version of the Honda CBR 150R, which will be Honda CB150R. The bike is expected to reach the land of India in February 2013 with many more countries to follow it up too. 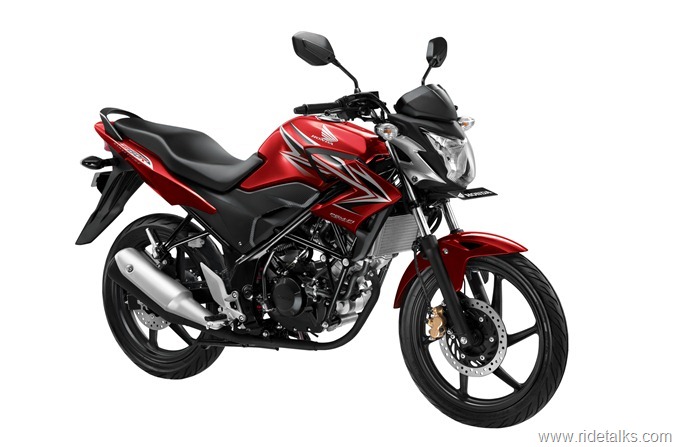 CB 150R will be the name and it was first showcased at the Jakarta Motorcycle show 2012 and has been built specifically to cater to the needs of the Asian markets, It is the naked CBR 150R and borrows designing cues from the CB1000R which we need not say is quite the mirror cracking big brother. It will be powered by the same engine which powers the CBR150R which is 149.4cc liquid-cooled and fuel-injected motor and gives out 16.8 BHP at 10000 RPM and the torque having a peak figure of 1.33kgm at 8000rpm.

The CB150R will receive some changes in the setup and ergonomics to become a capable commuter come streetfighter. Its main rival will be the Yamaha FZ series and Pulsar 150cc/180cc which have been known for the ridability they offer. The Honda will have an upper edge since it gives out more power than the other 150cc bikes present in the Indian markets. We wish to wait and watch as to which countries witness the street fight these bikes will start up. Stay tuned to Ride Talks for latest updates.