The Fully Faired Ninja 250R/300R has been the meanest quarter litre kid on the block for a while now with no real competition when it came to the outright performance. However the bully had been struggling for a while because the other kids on the block had started standing up to him (read as Honda CBR250R and Hyosung GT250R) and started making the roads bully free. But the baby Ninja has just been joined in by a younger sibling, the Z250 which will team up with the elder sibling to gain their lost respect.

Kawasaki Z250 has been launched by Kawasaki in Indonesia and the bike will be the stripped down or the street-fighter version of the Ninja 250R and will bring the looks of the Z800 in the quarter litre segment. The bike has 250cc parallel twin-four stroke engine which comes with 8 valve-DOHC layout. The engine is expected to churn out 33 horses and the torque will max out at 22 NM but the official figures have not been revealed as yet. The engine will be mated to a 6 speed manual transmission. The bike will share a lot of parts with the Ninja 250R including the engine, frame, instrumentation console, telescopic front forks and the monoshock rear unit. The bike since has the same heart but no fairing, will be quite a performer and the bike will be faster than the baby Kwacker because of the lesser kerb weight it will have to carry with it. White, Black and Red will be the colour options and since the bike will be built in Thailand, expect an official announcement regarding a launch there as well. 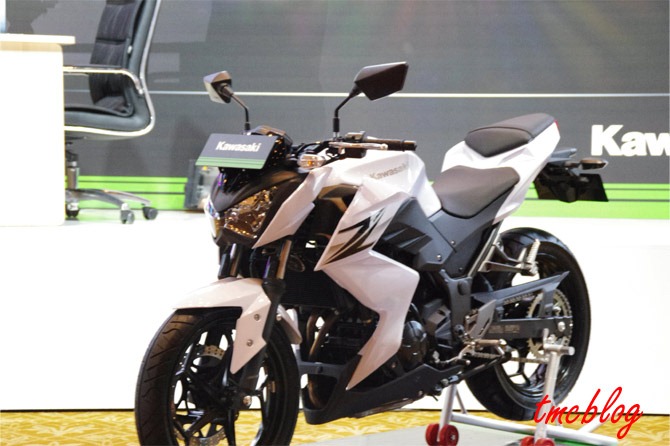 The bike will compete against the KTM Duke 390 in terms of pricing if not the engine displacements as Ninjas tend to be pricier and this being a naked Ninja, will be priced at a premium too. There is currently no official word on pricing and availability but expect Kawasaki to announce the global roll out soon which will take on the street fighters on the road. The bike will stay true to the Ninja characteristic albeit in a naked form which makes it look all the more aggressive. The bullies are back.