A little over a year ago, Honda had showcased a curious looking motorcycle concept in Japan called ‘Bulldog’. While the manufacturer refused to comment on the bike’s future, recently patent images depicting a similar looking motorcycle were leaked sparking rumours that the Bulldog might just make it to production. The Bulldog concept is a leisure motorcycle developed, according to Honda’s press release, “with the concept ‘Lovable Touring Partner’.” The bike seen in the patent images isn’t exactly identical to the concept showcased last year as it bears a few minor changes. Here, in this post, we have gathered all the information available on the Honda Bulldog launch, specifications and images. The Honda Bulldog was showcased as a concept last year. It is based on the Japan-spec CB400F (CB500F in other markets) utilising the same engine. The Bulldog is sort of a utility quad-bike sans a couple of wheels. On the outside, it gets rugged, utilitarian styling and a bunch of clever storage spaces. Honda says, “the Bulldog was designed to go beyond the boundaries of conventional leisure motorcycles, to actively enjoy outdoor life.”

The bike shown in the patent image sports different indicators and a different tail light. Also, the brake discs might be different to the ones seen on the concept. The rest of the motorcycle remains largely unchanged. It borrows the CB400F’s engine, which is a Japan-spec model, that puts out 46 PS of max. power and a peak torque of 37 Nm from a water cooled four stroke 399 cc engine. 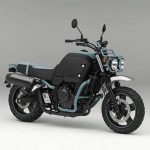 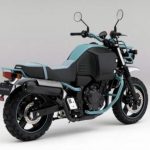 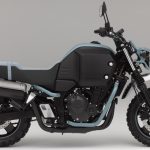 Honda has also patented the clever storage spaces that we showcased on the Bulldog concept. There are storage units on either side of the fuel tanks. While they appear to be integrated with it, they can be opened to reveal a good amount of storage space, sort of like panniers.

Honda hasn’t given out any information regarding the Honda Bulldog launch, price, images and specifications, but it might just see the light of day by early next year. Especially when you take into account the fact that it shares most of its parts with existing motorcycles, which are already being mass produced. However, such a model will cater to a niche market and may not even find enough buyers.

Stay tuned to Ride Talks for more info on the Honda Bulldog launch, specifications, images and other news from the world of two wheelers.