Seen here on this page are probably the first-ever photos of the upcoming all-new 2018 Yamaha MT 07 Tenere adventure motorcycle. These images have been taken by the good chaps at MCN, who shot the motorcycle during its on road testing in Europe last week. It maybe noted that rumours of a new MT 07 Tenere have been doing rounds since a few months now. However, it is only now that clear spy pics of the upcoming motorcycle have surfaced on the cyber space. These images were taken in the vicinity of a Yamaha test facility in Italy. Among many other details, these 2018 Yamaha MT 07 Tenere photos reveal that the bike is will have decent off-road credentials as the upcoming bike can be seen featuring a 21in front and 18in rear wheel. This is sure to optimize the bike’s performance off the beaten tarmac. 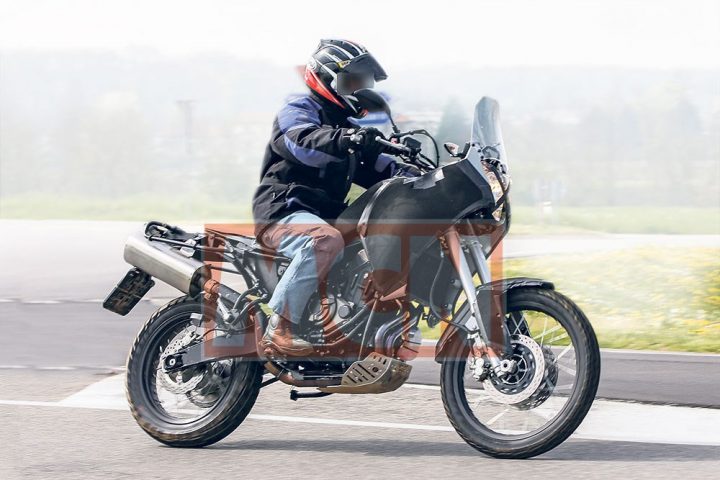 As we just said, the 2018 Yamaha MT 07 Tenere has been in news since a few months now. However, the bike’s release date will fall only late-2017 and the new motorcycle will be revealed as a 2018 model. The market launch could take place in early 2018. The Mt 07 Tenere is expected to follow the much anticipated R1-based MT 10. Also, while Yamaha has said that it has no plans to come up with a Tracer version, the R1’s 1.0-litre Crossplane crank four pot motor could be seen powering many future models across different series. The upcoming Yammie is expected to become the most significant of future models planned by the Japanese bike manufacturer. The upcoming MT 07 will be slotted below the XT1200Z. The once popular XT660Z isn’t on sale in European markets anymore. And the 1200cc version has never really faced much success. Hence, the MT 07 Tenere becomes a really important product for the manufacturer.

Price – Yamaha has always been ultra competitive when it comes to pricing of the MT range of bikes. Hence, we don’t expect the Tenere to be exorbitantly priced. Currently, the entry-level variant of the MT-07 retails for £5349. The Ténéré version, however, could cost a shade under £7000. To keep the pricing under check, Yamaha is likely to leave many parts of the MT 07 unchanged. However, it will definitely sport the necessary engine updates to comply to Euro 4 regulations. Worth a mention here is that all bikes sold in Europe after January 1, 2017 need to comply to stricter emission regulations. The MT 07 will get an updated version of the current version’s 689cc CP2 engine. The updated motor will be Euro4 compliant is expected to produce a max. power of 75bhp and a peak torque of 50ftlb. We feel that such a power output is sufficient for a serious adventure bike like the MT 07 Tenere. While the engine has been carried over from the regular MT 07, the Tenere will sport many new parts. For example, the long-travel front forks, a pre-requisite for off road bikes, is new. Also, the bike gets many new panels and a new handlebar along with an all-new subframe that seems to boast of a mix of cast aluminium sections and steel tubes. Even the swingarm seems to be different. Another highlight are the brakes, which come from Brembo. This is in stark contrast with Nissin hardware we have seen on recent Yamaha models. This departure hints at a Bosch braking system that will offer ABS.

The bike you see in the pics here is far from being production ready. However, the upright front fairing, large side panels and an off-road friendly front mudguard hint at this bike’s true blue adventure motorcycle looks. On closer observation of the pics, we can make out that the screen is set upright and can’t be adjusted. The MT 07 Tenere gets 21 inch and 18 inch spoked wheels at front adn rear respectively.Expect the upcoming bike to offer panniers to carry fuel can, etc.

Little else is known about the upcoming 2018 Yamaha MT 07 Tenere but you can safely stay tuned to RideTalks for more on this upcoming adventure motorcycle.