Yamaha India has planned to launch its scooter Yamaha Ray in September 2012 in India. Prior to its entry into scooter market in India, Yamaha India has announced that it will expand its dealership network to 2000 by 2018 which is 5 times its present network of 400 dealerships across India (as on August 2012). This aggressive growth target of expanding the dealerships 5 folds in 6 years is a part of Yamaha India’s strategy to increase its sales volumes in Indian two wheeler market by launching more low cots scooters and entry level motorcycles in Indian market. India being a rapidly emerging economy has a lot of demand for two wheelers. The glowing population and congested traffic environment coupled with high fuel prices and taxes push more and more entry level buyers towards two wheelers rather than cars.

Yamaha India will focus on developing stronger presence in tier 2 and tier 3 cities where the growth in sales of two wheelers is quite strong. On 20th August 2012, Yamaha inaugurated 2 dealerships in Pune, India and 4 more will be opened in Maharashtra by first week of September 2012. As of now, Yamaha India’s market share in India two wheeler markets is single digit and it has plans to gain 10% market share by 2016. The growing sales in the two wheeler market in India is because of rapidly growing middle class and increased disposable income due to consistent economic growth in India in past few decades. 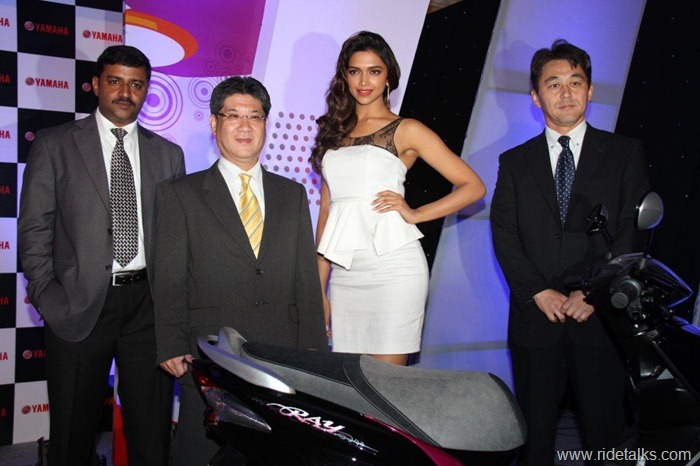 Yamaha India is quite aggressive with its ad campaigns and promoting its high quality products through online, TV and print media. They have recently tied up with popular actress Deepika Padukone who will endorse the scooters of Yamaha India which launch in September 2012. Yamaha India will invest close to USD $ 28 Million or Rs. 1500 Crore in India for developing its upcoming third manufacturing plant in Chennai in next 5 years time span.

“The Yamaha family is looking forward to a stronger dealer and sales network strategy to reach out to more people with our products and services while continuing to serve our loyal customers.  Keeping in mind the increasing demand in two wheelers, we are planning to expand our dealership network extensively. Pune, the automobile city of India has ample of untapped market in this segment and we are looking forward to make a strong presence in this city”.

Stay tuned to Ride Talks for more updates by signing up for our free email newsletter.