Earlier bikes were meant for riding only but when riders started exploring their capabilities, this very practice was given a new name, Stunting. In today’s world the stunt rider community is as massive as you can think of and with each day it is growing more and more. What convention is being followed since a while is that a rider buys a powerful motorcycle, removes the extra plastic from the body, and installs aftermarket parts that enhance the performance of the motorcycle to extreme levels.

Considering what riders have to go through in order to turn their standard bikes into outrageous stunting machines, Yamaha has come up with an interesting alternative at the International Motorcycle Show going on in Cologne. I know the motorcycle in the image looks fabulous. This is the latest gift from Yamaha for stunt riders across the planet. Called Yamaha Moto Cage-Six Concept, this motorcycle is designed specifically for stunt riders. As evident from the rear and side of the motorcycle, it is based on the Yamaha XJ6 but does get some additional cues from the Tenere and the Super Tenere. The graphics used on the motorcycle are simply stunning and for sure it is an eye catcher. Some of the highlights of this concept stunt motorcycle concept are as follows: The motorcycle has received a mixed response from the fans and critics active globally. To some the bike brings a lot of excitement but to others it is not going to be successful among experienced riders as a stunt motorcycle is hugely customized and is constantly tuned to suit the rider’s stunting style. Professional riders are less likely to opt for this motorcycle as they customize their machines on their own and never go for stock gear, but amateurs who are new to stunting would definitely get benefited with the Moto Cage-Six Concept.

As of now Yamaha says that it is a production motorcycle only but it wants to put the motorcycle to the production line, and this could happen soon. 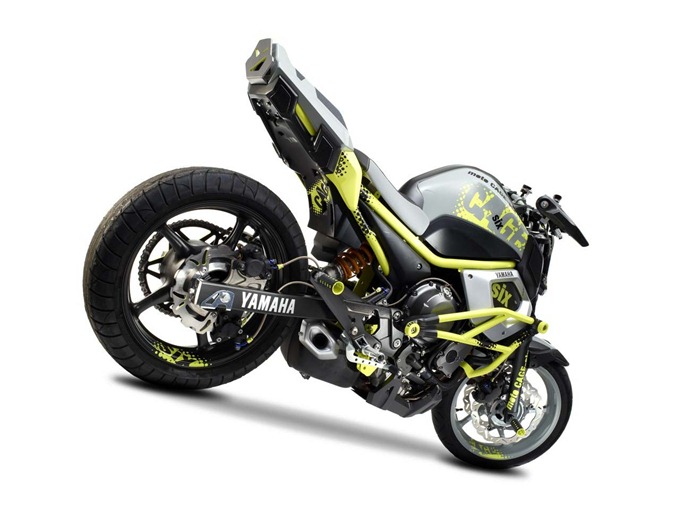 Stay tuned to Ride Talks by signing up for our free email newsletter.