Touring and off road riding enthusiasts all over are raising eyebrows over the recent rumors circling around the internet. BMW has given a sneak peek into their latest project, which is supposedly the revival of the all time touring and adventure superbike , the R1200GS. They are calling it the new BMW R1200S. And don’t for a moment be fooled that it’s going to be just a spruced up version of the old legend. German magazine Motorrad has created renderings of what can be called an extreme makeover. None of what you see is picked from the old bike. The new BMW R1200S is a completely new design and different too; if you look over the conventional design of an off roading bike, it immediately showcases the job it’s made for. Not in this case though. The new rendering promises a different story. It has more of a superbike look to it. Basically it’s an adventure bike that put on a race suit. And boy does it fit. BMW have beautifully incorporated their trademark kidney grille and being the thorough Germans they are the grille has a function; managing airflow to the engine with the help of added flaps. They also continue with the asymmetrical dual LED headlights, which for even a person with OCD is cool. The windshield is adjustable too, again showing that almost every aesthetic has a function. The fairing that gives the whole brute look to the bike is made from pressure cast magnesium. The hefty fuel tank has a capacity of close to 8 gallons (approx 30 liters), which gives it around the same range as its predecessor. The robust chassis being a three piece frame structure made from steel and aluminum tubes assure handling supremacy as well as a tendency to take a beating without flinching. 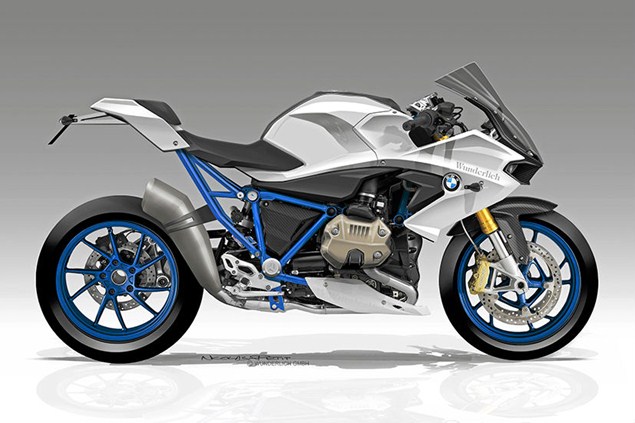 The distinctive feature that separates the BMW from the rest of the pack is its drive shaft. The non chain, maintenance free drive shaft with a single swing arm that made headlines when it was launched, is placed right where it belongs adding nostalgia to the bike. The exhaust is tucked under the tail in an attempt to make the beast look docile. The R1200S has 18 LED’s in the rear tail light, which is probably the only bling on the bike apart from the headlights and the indicators that are merged in the mirrors like many bikes nowadays. Coming to the heart and soul, the bike will be sharing the GS air/liquid cooled 1170cc engine which pulls 122 horses at 8250 r.p.m. The inlet and exhaust valves are vertical like the old bike for efficient power delivery. The cylinder heads are modified and the flywheel mass has been increased and added with vibration dampers. The telelever front suspension coupled with all this makes sure the riding isn’t regretful. Ground clearance and seating position is appropriate for every condition. The bike weighs at 213 kg kerb weight on a full tank, which is 13 kg lighter than the previous big boy.

Technical goodies like ASC and ABS are standard. Also the option to disconnect ABS is available for the confident track rider. The instrument cluster has a crisp display even in bad light and shows the current gear in mesh, oil temperature, the amount of fuel left, and the range on the fuel.  The paint scheme that is finalized is a red non-metallic paired with silver metallic and a matte black that is seen on the K series. All show apart, the new BMW R1200S isn’t just a show boy. It was made sure by the boffins in Germany that it can live up to the great name it is associated with, that it looks at home on a track and dusts its competitors off it. In one word? Wunderbar!