Regulars here would know that only yesterday we posted about the much awaited Honda Africa Twin CRF1000. Now, subsequent to our yesterday’s reporting of Honda’s dune bashing Africa Twin CRF1000L, here’s another good news for the two wheeled touring fraternity. KTM 1290, which is another highly awaited tourer has been spied on tests by popular international motorcycle website VisorDown in Spain. It maybe noted that of late, Spain has been a rather regular testing ground for the upcoming KTM motorcycles. Worth a mention here is that while we are really excited about the spotting of this motorcycle, it is not the first time that the 1290 SuperDuke R based tourer has been caught testing- in fact, the same bike was spotted last year as well. But considering the course of tests- it won’t be out of place to say that the motorcycle is inching closer to becoming a production reality. 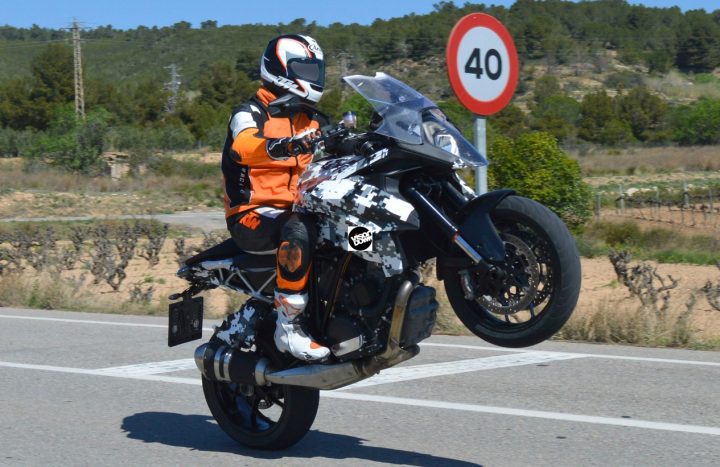 As can be noted from the upcoming bike’s name, the KTM 1290 SuperDuke GT would be sharing the 1301cc V-twin engine with the rather menacing KTM 1290 SuperDuke R. With the SuperDuke R pumping out a staggering peak power of 180 bhp, we assume the SuperDuke GT would get a tweaked motor that will be in a different state of tune (though we do not expect much loss of power). This would ensure the motorcycle’s touring friendliness- though the test rider in the pic seems to be in a diverse mood popping up the front wheel.

Unlike last time, the bike in the current image has shed substantial camouflage with the beak-y front and the tall screen amply visible. The exhaust seems to have been carried over from the 1290R, and so do the wheels, the WP upside down front suspension, chassis, Brembo braking system. Also, in most probability, the bike will get a similar single sided swingarm- maybe with added reinforcements for tackling undulations. A rear sub frame has been included to lug around the touring essentials i.e. hard bags, top box etc. 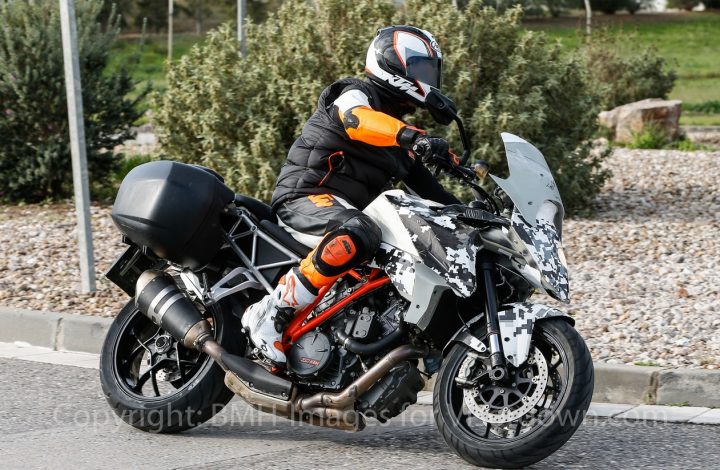 The KTM 1290 SuperDuke GT will be seen filling the gap left by the sad demise of the very capable KTM 990 SMT. The upcoming motorcycle will be locking horns with some established bikes, such as the BMW S1000XR, Ducati Multistrada, Suzuki VStrom etc. It would be but obvious to expect KTM to shower the new SuperDuke GT with modern electronics package including the new state of the art Bosch Motorcycle Stability Control- which offers benefits of ABS and traction control but widens the scope with the addition of lean angle data.

KTM 1290 SuperDuke GT is expected to be officially unveiled in September, 2016 and is slated to go on sale in international markets shortly thereafter.

Stay tuned to RideTalks for more updates on the much awaited KTM 1290 SuperDuke GT.