US based motorcycle sport company Erik Buell Racing (EBR) unveiled the naked street fighter superbike EBR 1190SX on 11 June 2014. The new motorbike was revealed at the Indianapolis Motor Speedway in an invitation only event. The SX is a derivative of EBR 1190RX as it appears but has gone certain mechanical changes for providing the bikers with a more on road and less on track experience. The company gave no details regarding the bike’s technical specifications but the details are expected on 4th of July while the full and final launch of the bike is expected in the later half of this year. 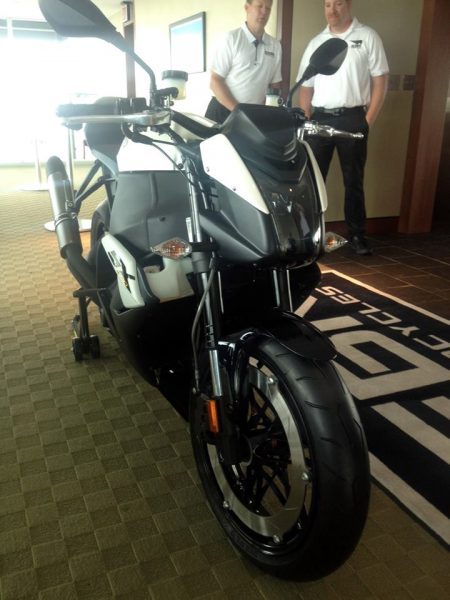 Though for a more civilian and a less on track look the SX has got rid of the full fairing design giving a cleaner look still the design encompasses the basic 1190RX chassis which is a magnesium sub frame with fuel in frame design. The tubular handlebars have replaced the clip-on handle bars and the seats are extra padded for a smooth and comfortable on road experience.

Being a cousin of the 1190RX the EBR 1190SX is sure to be powered by the 1190cc V-Twin engine which produces 185 H.P of power along with a 138 Nm of torque.This power is supplied to the wheels through a 6-speed transmission and a hydraulic multi-plate slipper clutch. For the brakes the bike employs disc brakes in front as well as rear.

Thus by giving away the all full fairing the new launch is expected to loose some weight and to be lighter than its cousin 1190RX. The expected weight is 188 kgs. This bike will have to stand against the tough competition of big players like KTM 1290 Super Duke R and Aprilia Tuono V4. This new bike will be lesser in price than its cousin 1190RX which costs $18,995. The new price tag might read $16,000.