BMW's to be launched sports Tourer 1200 spied on test in Germany. The spied motorcycle looks little different from the traditional BMW Motorrad’s design . It is a twin Sports Tourer bike supplementing the older R1100S. The bike is likely to be called R1200ST (Sports Tourer) or R1200GT (Grand Tourer) though ST badge is more likely to be preferred over GT as the bike appears more sporty than a GT. On a closer look, the bike is fitted with big pillion& pannier rails.Perhaps fulfilling ‘Tour’ aspect of the bike. With Triumph’s Sprint GT in the Hinckley range and Honda’s VFR800  all set to join the competition  new BMW will fill the gap and site nicely between the full blown R1200RT and F800GT.

The yet to be launched BMW 1200 Sports Tourer has a flat twin boxer engine .The newly generated boxer engines are much more refined than their previous versions, which were clunky. The new boxer engine offers smooth gear movement and pulling power across the entire Rev range. The engine comes with “vertical flow” head and ride-by-wire electronics featuring 5 nodes that influence throttle response, power delivery and other parameters to keep everything accurately German. It uses a version of the liquid cooled R1200GS engine and chassis set-up with extremely comfortable high handlebars to offer appropriate riding position. The bike is expected to churn out 126 NM of torque and 125 bhp of maximum power. The headlights look like they have been lifted straight from BMW S1000R. The bike comes with advanced electronics features like traction control, anti-locking braking system, Bluetooth and much more. 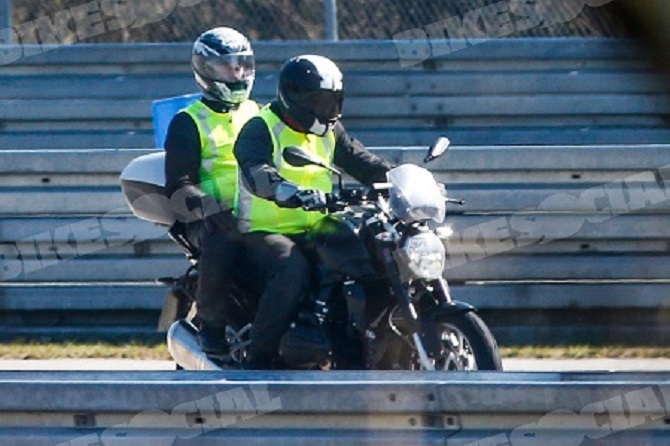 The only limitation is the R1200ST is on a well contested ground.  It is pitted against well established brands like VFR800 VTEC of Honda and Triumph’s Sprint ST.  Both the competitive machines are faster, sharper and cheaper.

When BMW UK was contacted for their views on the leaked photographs, they said”We do not comment on spy shots”. Amidst all the speculations, the soon to be launched BMW sports tourer is expected to take luxury –touring bike segment to the next level.