BMW Motorrad is in the celebration mood and it has just showcased the BMW Concept Ninety to celebrate the 40th anniversary of R90S. It has been developed in partnership with Roland Sands Design. The bike has its origin way back in the day in 1973 which is when it was first showcased. The bike was a hoot to drive then and could easily go upto speeds of 124mph. It was the first motorcycle to feature a standard front fairing and it wore the Daytona Orange skin colour. 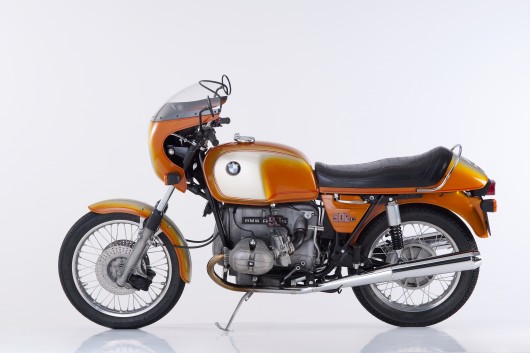 “The BMW R90S hails from an era in which bikers were regarded as outlaws,There was something rebellious about it – it was fast, loud and wild. Pure emotion. And it has retained its fascination to this day, ” is what Edgar Heinrich, Head of BMW Motorrad Design had to say at the showcasing of the concept.

The concept bike remains as closer to the the original one, though one can not rule out the touch of modernity. The front of the bike looks similar to what the R90S used to be like and the crafty work at the tail can not be overlooked as well because the rear tails is cut short in size and the rear fenders takes an exit as well.

Dual RSD exhaust pipes present on the left side will be the belting out the smoke. An Ohlins suspension coupled with the gas forks will be the ones doing the duty in the handling the bumps in the roads department. RSD has also been responsible for bringing the bike to a hault and the clutch lever. The fairing has a LED headlight and the Brembo brakes on the Dunlop tyres will be present as well.

The bike was something out of this world at that time and was the bully on the street. 40 years later, the legacy lives on.