Indian Motorcycles have been quite popular since Polaris re-launched the brand a few years ago. Today, Indian sells motorcycles in big numbers and has a huge fan following to go with the same too. Today, we will be talking about one of its motorcycles, the Chief Dark Horse. This bike is one of the members of the Chief range that also has Chief Classic as its member. What separates this bike from the Chief Classic is its paint scheme, which Indian calls Thunder Black Smoke. Keep reading to know more about the 2017 Indian Chief Dark Horse price in Canada, specifications and other details. Costing a buck under $21,000, the 2017 Indian Chief Dark Horse isn’t exactly what you call an inexpensive bike. After all, you can get a number of litrebikes for less price. However, Indian motorcycles are not about sheer numbers. They are about experience. For this purpose, Indian bikes can be had with a number of accessories. While they do drive the cost of bikes up, Chief Dark Horse included, the cruiser buyers don’t mind this aspect one bit.

Also Read: All About 2017 Indian Scout

The massive V-Twin engine displacing 1811cc is the highlight of the 2017 Indian Chief Dark Horse. It’s not-so-great power output of 83.9HP is something you should not care much about. This is because at 161Nm, this bike has great torque to help it get up to cruising speeds quickly. On a bike such as this, you will not be getting into a speed contest with anyone now, would you? Helping it come to a dead stop quickly are dual disc brakes up top and single disc brake at the back. 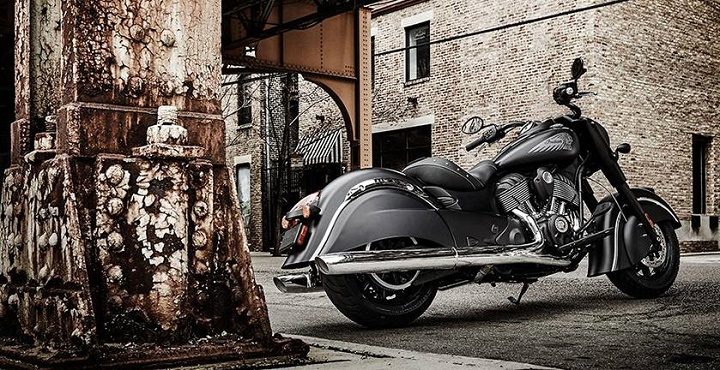 Offering ABS, keyless start and cruise control as standard make the 2017 Indian Chief Dark Horse a nice bike to go for. For all the features it may be missing, you can have them for extra payment from the huge accessories list. So, this bike may seem like a one-size-fits-all product. It, however, can be tailored to each individual owner’s taste to offer that custom experience everyone looks for in a bike like this.