At present Ducati’s Hypermotard series has two offerings, Hypermotard 796 and 1100 EVO SP. A few months back an image taken by a professional spy photographer surfaced the internet where a new Hypermotard was being taken back into the factory and the most interesting thing about it was the engine which is speculated to be borrowed from its bolder sibling Streetfighter 848.

Then it was just a news but recently the bike has been spotted yet again, this time in Bologna near the Italian bike maker’s factory. Heavily camouflaged, the bike still tells a lot about itself including the expected 848 water cooled engine with a maximum power output of 130 BHP. Since the Multistrada and Hypermotard  have the same foundation we believe the new engine will get both type of reactions. For the Multistrada series, a new less powerful engine will be a little disappointing while for the Hypermotard series the 130 BHP engine will a huge power bump. So it will be a compromise for the Multistrada line-up whereas an accomplishment for the Hypermotard series.

Let us come to the looks of the motorcycle now. The front is typically the same as outgoing Motards while the rear, sporting a more modern looking belly mounted exhaust is closer to the Multistrada. A new frame has been adopted along with a new swingarm featuring an off set rear shock absorber which is similar to the one we see on the Panigale. Brakes will come from Brembo and Ohlins but what we are eagerly looking forward to is the electronics. We could expect some high tech electronics such as multiple traction control settings, ABS, suspension etc. 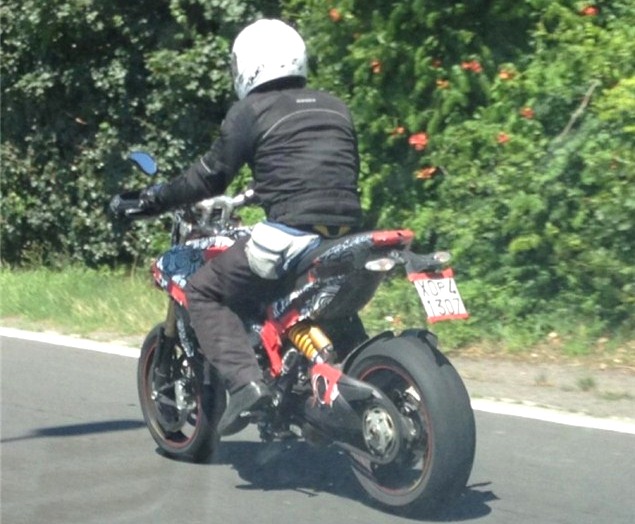 Stay tuned for more updates and scoops by signing up for our free email newsletter.