German automobile manufacturer, BMW will unveil its sub-500 cc small bikes in 2015. BMW Motorcycles head, Stephan Schaller, has confirmed it to MCN that these smaller bikes will arrive soon in 2015. BMW will manufacture these bikes in collaboration with TVS India. For the same reason, BMW has signed an agreement with TVS (manufacturer of motorcycles, mopeds, scooters etc. in India). The upcoming BMW small bikes with TVS are most likely to be powered by 300cc engines. BMW small bikes with TVS are expected to be unveiled at Germany’s Intermot Show in Cologne, in October 2015. 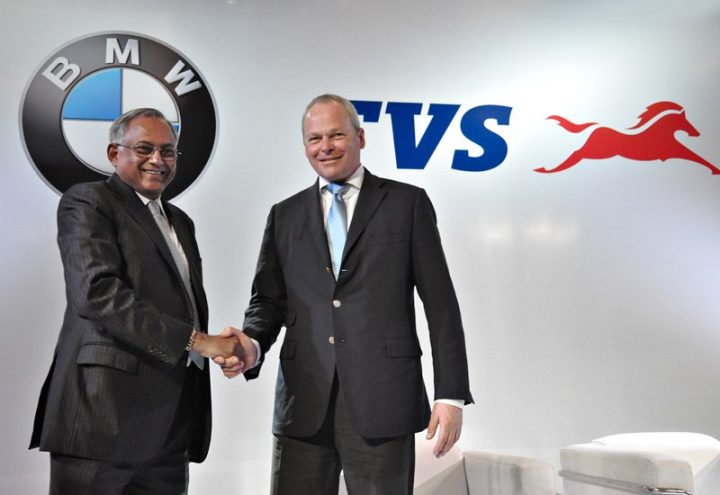 In this tie-up the responsibility of design and engineering is held by BMW in Munich while TVS will be responsible for the production of these bikes.This partnership will help BMW to make its hold in India to manufacture the bikes and import them to others kinds just like the way KTM does.

A 300 cc engine motorcycle from TVS has already been spied earlier. Thus, if the 300 cc bike under BMW-TVS tie-up gets launched, it will compete with Kawasaki Ninja 300 and Honda CBR300R (yet to be launched).Ninja 300 is equipped with 296 cc 4-stroke, liquid-cooled, DOHC, parallel twin engine which produces 39 PS of maximum power and 27 Nm of peak torque. It is mated to a 6-speed transmission.

The CBR300R will be powered by 286 cc singlecylinder which will churn out 30.8 PS of power. It will be mated to 6-speed gearbox and it is expected to be launched in 2015.

“We will keep the original timing, but maybe we have to put a little bit more resource into this to keep with the schedule. In one year’s time I think we can start talking about the new bikes. The design and engineering are done by BMW in Munich and then TVS is doing much of the work to get these bikes ready for production,” said Stephan Schaller.

Bike enthusiasts now have a reason to stay excited with the announcement of smaller displacement bikes from BMW in collaboration with TVS.

Rest of the details are somewhat sketchy since BMW and TVS have not confirmed any further details about the range of bikes, pricing etc. Stay tuned for more updates.