New images of Ducati Scrambler 2015 got revealed while undergoing a test-drive in Ducati’s testing arena in Bologna. These images have come days after the Italy based manufacturer released the teaser images of the yet to be launched Ducati scrambler 2015.

The bike won’t be officially unveiled until later in the year and will be in dealerships from next year October. The Italian superbike will most probably be launched at EICMA auto show in  Milan in October 2014 or INTERMOT motorcycle fair in November this year. 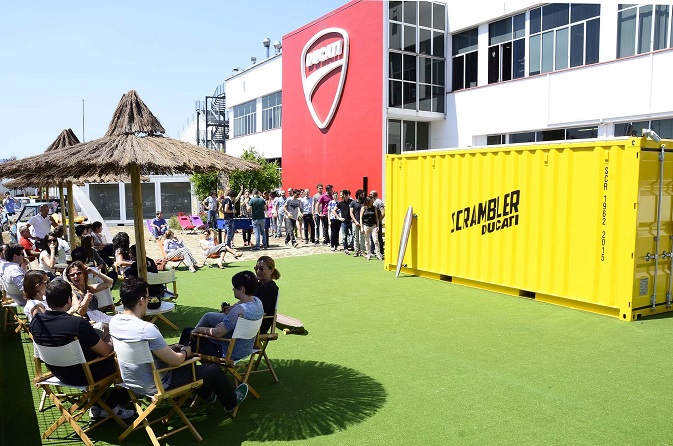 The Italian superbike has already taken shape because the Scrambler prototype was officially revealed to Ducati’s Bologna employees in a private viewing. Ducati has even launched a new website with funky videos of the all new Scrambler 2015.

born in 1962 from Scrambler Ducati on Vimeo.

The motorcycle will be equipped with air-cooled 696cc or 796cc engine . It will come with a single front-disc brake, LED headlight, 10 spoke wheels and Diavel’s L-Twin engine setup.

The seat appears to be a flat, single-piece  ”banana” seat, with the fuel tank elongated for that unique scrambler style. The spied photographs depict the exhaust and engine were encased in an aluminum surround with an emissions tube running from the exhaust outlet to the orange Motel tank mounted on the row of the bike.

The exhaust is unfinished but a Double sided swing arm can clearly be seen, upside down forks and Radial mount calipers and a fairly upright riding position. The fuel tank sources a two-tone retro look one of those tones being yellow.

The new Scrambler seems to embody some core values from Ducati’s glorious period of 60’s and 70’s.  It seems to reinterpret the original model in an entirely up-to-date manner. The Scrambler of the 70’s was an evolution of a previous 250 cc enduro model named the Moto Cross and was inspired by 250 dirt trackers that were derived from Ducati 250 Diana. The 125cc, 350cc and 450cc models of the old Scrambler are still sought by collectors and maintain high values. Aimed at new generation bikers the Scrambler will be manufactured in Borgo Panigale and Thailand.  By producing the new Scrambler in Thailand Ducati aims to keep the price at a competitive level ,which will help ensure the success of the model.

In the midst of all speculations the new Ducati Scrambler 2015 is set to delight thousands of bikers around the globe.