KTM has already disclosed the fact that India is quite an important market for them and out of the blues, have unveiled the 350 SX-F dirt bike in the land of India. The bike broke cover at the KTM Orange Day which was held in Mumbai and as of now there are no official words regarding the launch of the bike in the country and the bike will join the RC8 as a display unit later in the day. A point worth mentioning is that the company is going to launch the KTM Duke 390 in India in a few days.

KTM 350 SX‑F has been the bike that has emerged as a leader at many races. It gives you the thrills of a 450cc bike while offering you the dynamics of a 250cc bike. The 2013 edition of the bike gets a reworked engine and a new chasis which has been constructed out of a central tubular frame and chrome molybdenum steel tubes. The bodywork gets redone as well and the ground clearnance stands at 376mm which is pretty much more than a SUV. 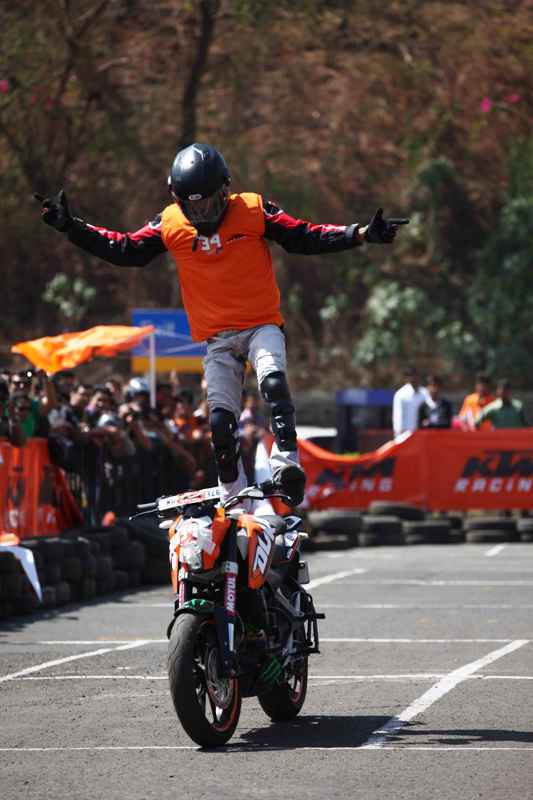 The front suspension has a travel of 300mm while the rear suspension gets a travel of 330mm. KTM 350 SX-F’s heart will be a 349.7cc, single-cylinder, liquid-cooled, spark-ignition, 4-stroke engine, which would churn out 54 horses and will come mated to a 5-speed claw shift gearbox. Fuel injector is shared with the RC8R and the bike will max out at 13,400 RPM. 300mm discs up front and 330mm discs at the rear will be halting the bike and the reason why it offers insane performance because it weighs a mere 104.8 kgs without the fuel.

KTM has not launched the bike but has instead unveiled it and it will reach some of the KTM showrooms in near future. It retails for £6645 in UK. The bike is quite the performer and it need not prove anything to anybody as it has proven almost everything that it needed to. KTM intends on bringing lower capacity Dukes to India as well as wants to launch more Dukes globally so we can pretty much expect a smaller capacity version of the KTM 350 SX-F getting launched as well in near future. The Dirt Biking segment is heating up slowly but KTM wants to make sure they are up for the challenge when the need arrives.